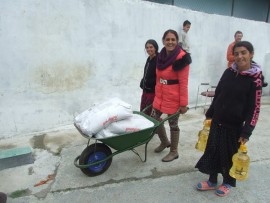 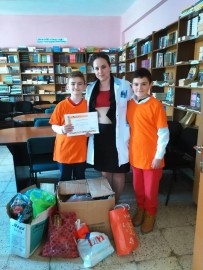 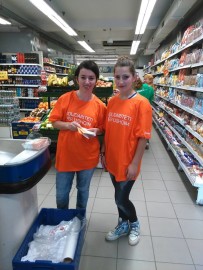 The first few months of the year have been busy for Food Bank Albania. In March, we completed the last month of food deliveries for the winter project. This project provided food to 250 families for the months of December, January, February and March. Winter is always the hardest time for food insecure families and those struggling to get by and Food Bank Albania is happy to be able to help some of those in need. A woman said that the help that she receives, she shares with other families around her. We are thankful to our partner organizations for helping to identify families and distribute food.

To keep our warehouse full, the Food Bank has conducted several food drives. Throughout winter and spring we visited local schools and asked students to contribute food to help the needy. Over the last several weeks, we have been collecting the contributions of students around Tirana and other cities. One of the Food Bank’s main goals is to get Albanian youth involved in the fight against hunger and the food drives are the best way to do that.

On April 9th and 10th the Food Bank conducted a community-wide food drive. With the support of Carrefour and Eco Market, volunteers from Food Bank Albania and the Red Cross were able to collect donations at 13 points throughout Tirana. If you went shopping on either of those days you may have noticed volunteers requesting donations at your local supermarket. The campaign was also done in the cities of Fier, Elbasan, Shkodër and Lushnje. It resulted in almost 2 tons of food donations that will help the Food Bank provide needy families with nutritious meals into summer.

During the month of March, the Food Bank started a Child Sponsorship Programme that aims at reaching about 30 Roma families in the Elbasan area. The goal of the project is to support them so that the little children can attend school.

Thank you to everyone who has helped with these efforts – without volunteers, financial support and food donations there wouldn’t be a food bank. Your time and contributions are making a difference in the fight against hunger in Albania!

On February 11 2016, Food Bank Albania hosted a meeting for 13 distributing organizations. It was a great opportunity to get together and evaluate our current programs and the needs of the people that we serve as organizations.

One of the benefits of getting together is the ability to collaborate to address our needs and identify areas where our organizations can work together. Many of the organizations are hoping to expand the number of families and individuals they can reach and would like to receive more food from the food bank. Food Bank Albania believes in this goal and believes that we can dramatically increase the amount of food we distribute by working together to provide volunteers for food drives and expanding the number of supermarket collection points that we offer.

It was a good way to start the year and to meet people who are invested in the fight against poverty! At Food Bank Albania, we have ambitious goals for 2016 and with the help of our partners we are confident that we can reach even more families this year! 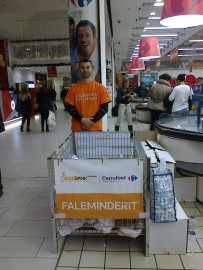 As we start the new year, it is the perfect opportunity to look back on 2015. In collaboration with FEBA (European Federation of Food Banks), Food Bank Albania launched several new programs and continued to expand its operations to reach more families and individuals in need. Here are some of the highlights of last year’s projects.

Food Bank Albania continues to expand its operations and distribute more food to needy families and individuals. In 2015, thanks to the generosity of donors the food bank was able to distribute approximately 18 tons of food. This more than doubles the amount of food that was distributed in 2014! As in previous years, all food donations are distributed by the food bank’s partner organizations and are given to families and individuals living below the poverty line. This increase makes a huge difference to families struggling with hunger! 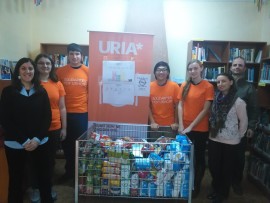 2015 was a year for collaboration with local agencies. During the year, Food Bank Albania’s
school project expanded to four Albanian cities: Tirana, Korҫa, Elbasan, and Shkodër. Food Bank staff presented information about food banks to students and asked them to participate in a food drive by collecting food at their schools. Food Bank Albania plans to continue working with students in the coming year to raise awareness of poverty and hunger in Albania. The food bank also began collaborating with two other soup kitchens in Tirana by providing them with food.

An ambitious initiative undertaken in 2015 was the winter project. This project will provide food for 250 Albanian families from December 2015 until March 2016. This assistance during the coldest months of the year will make it a bit easier for these families to get through until spring. Families supported include single mothers, Roma, people with disabilities, and families involved in blood feuds.

In December, Food Bank Albania conducted food drives on two weekends. Shoppers at two Carrefour hypermarkets and five Eco Market supermarkets were able to buy food to donate to the food bank and drop their donations off with volunteers as they left the store. These food drives collected 5 tons of food along with donations of clothing and needed personal hygiene items. This generosity is critical to the food bank’s mission! 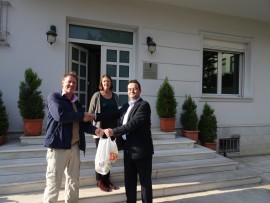 December was also the month of the food bank’s “Projekti “Shqiptaret per Shqiptaret” (Project Albanians for Albanians). In conjunction with the Dutch and United States embassies, the Belgian consulate, businesses, NGOs, and foreign donors Food Bank Albania collected food and clothing donations for distribution to needy families around the country. 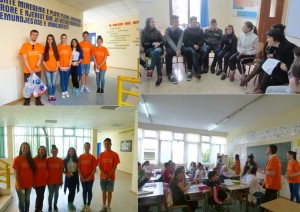 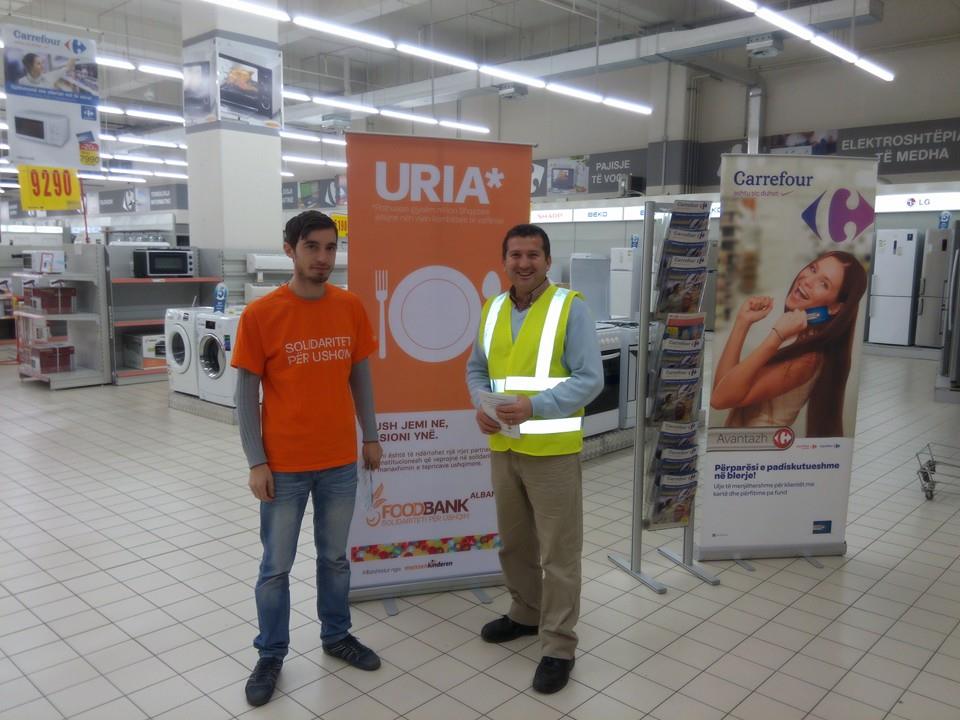 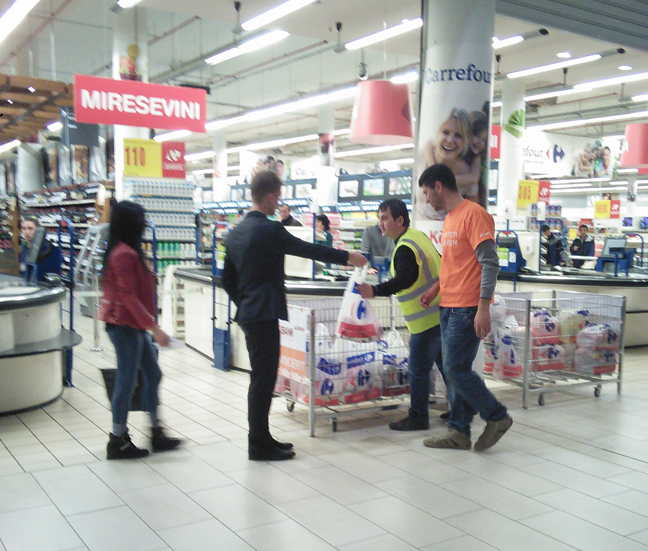 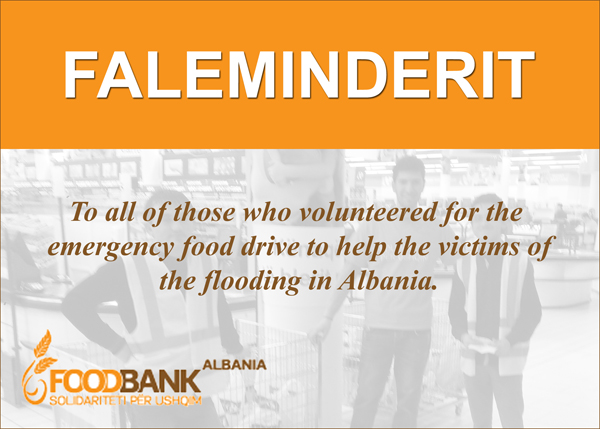 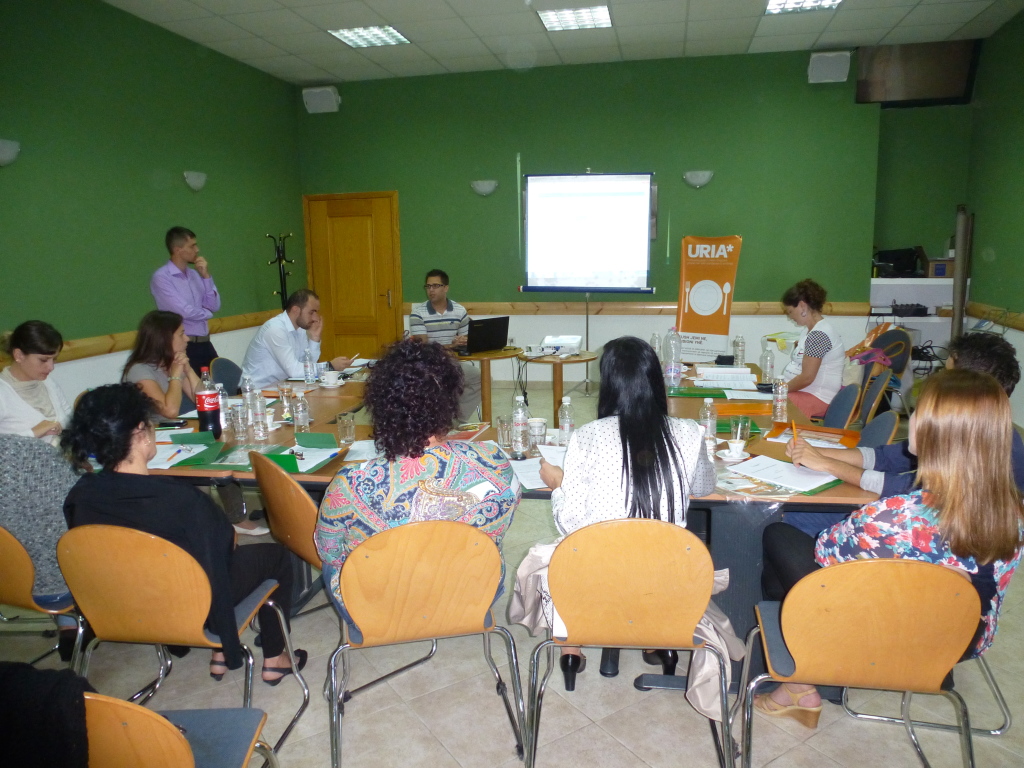